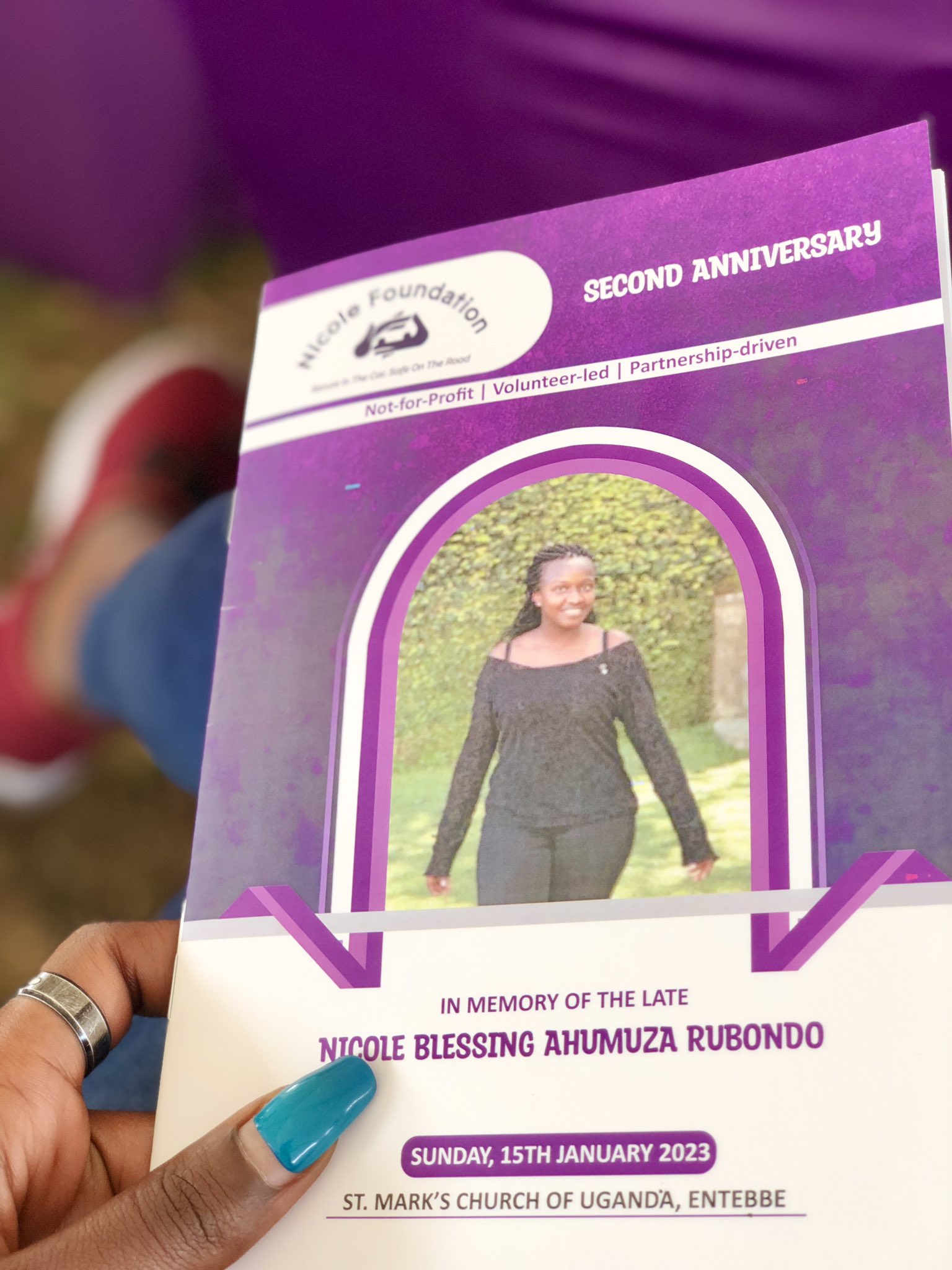 Following the Saturday motorcycle/bodaboda sensitization session that was carried out at the Kitooro Market, we joined the Nicole foundation team to celebrate their two-year anniversary. Starting off the celebration was a team from St. Mark Church of Uganda Entebbe which led us in prayer according to the day’s agenda.

We were then ushered into the day’s aligned program by Mr. Brian Mulondo, the day’s Master of Ceremonies (MC). Brian acknowledged the importance of road safety at all times as a nation and mentioned that during the breakfast show that he hosts on 93.3 KFM, it is a must for him to make mention of road safety every Monday to Friday when on air.

The celebration went on with a presentation from Ms. Ankunda Linda who spoke on behalf of the team of volunteers at Nicole foundation about the activities that they have been involved in throughout the year 2022, key highlights of 2022 and projections/plans for the year 2023. She highlighted one of their partnerships with the Innovation village as one that shall give them access to reach more youth with road safety messages once the app that is being built is completed.

Mr. Byamukama Norman who represented the team from Uganda National Roads Authority (UNRA) shared a detailed breakdown of the estimated 4.4 trillion (UGX) that is lost in Uganda annually due to road crashes. He however shared a ray of hope in bringing this kind of expenditure down once we kick off the implementation of the National Road Safety Action Plan which was launched last year in October by Gen. Edward Katumba Wamala, the Minister of Works and Transport.

The guests present and those who attended online through zoom were then addressed by the day’s Guest of Honor- Major Gen. Kahinda Otafiire, the Minister of Internal Affairs. In his speech, he mentioned that the first task we have is to change the mental attitude of Ugandans because the amount of wrecklessness on the road exercised mainly through impatience has cost us the lives of many citizens. He further questioned UNRA on why our roads have a short life span of up-to 7 years and yet the budgets for roads are enormous.

The late Nicole’s mother and siblings in their speech appreciated family and friends for all the support that has been rendered to them as a family since the death of their beloved daughter. The mother further appreciated the support offered to her at Agha Khan hospital where she had been diagnosed with severe depression after the burial of Nicole.

Mr. Ernest Rubondo, the Chief Executive Officer (CEO) of Petroleum Authority of Uganda (PAU) and father to the late Nicole Blessing Ahumuza Rubondo in his remarks mentioned how the support from especially non-family members mostly birthed the idea of starting up a foundation in honor of Nicole’s life.

He further appreciated the collective unquestionable support from all family members and friends that has been offered from the foundation’s establishment to date. He then concluded the celebration by ushering the members present to a cocktail to crown the evening.